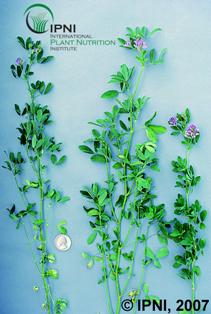 Alfalfa is often referred to as the “Queen of Forages” because it produces high yields that are highly digestible and high in protein. Alfalfa can be effectively utilized in managed grazing, hay, or silage systems. It is often used in rations when nutritional needs are very high. This factsheet provides a brief overview of alfalfa management. A more detailed description is available in Extension Bulletin B1350: “Alfalfa Management in Georgia.”

Alfalfa can be grown throughout the state where suitable soils occur. In general, well-drained bottomlands in the Limestone Valley/Mountains and Piedmont regions will provide the best results. Within the Coastal Plain region, the sandy loam soils provide good sites, especially if irrigation is available. Most sites in the Atlantic Coast Flatwoods and Tidewater areas will not be sufficiently well-drained to successfully produce alfalfa.

Alfalfa requires a relatively neutral soil pH (6.5-6.8) and non-limiting levels of essential nutrients. Alfalfa is especially sensitive to potassium (K), phosphorus (P), boron (B), and molybdenum (Mo) deficiencies. Close adherence to soil test recommendations during and after establishment are critical.

Alfalfa stands eventually thin to a point where the land must be rotated out of alfalfa. However, the lack of sufficient soil fertility is the most common contributor to accelerated stand declines. Disease pressure, insect damage, poor weed control, overgrazing, and improper cutting management also contribute to poor persistence. Stands in the Coastal Plain region generally have a shorter life (two – five years) than stands on the heavier soils in north Georgia. It is not uncommon for stands to persist for four – seven years (or longer) in the Piedmont and Limestone Valley/Mountains regions.

For monoculture stands, it is best to seed alfalfa on a well-prepared, firm seedbed. On prepared land, plowing and disking operations should be done as needed to incorporate pre-plant applications of lime and fertilizer and to ensure a good firm seedbed. A preemergence application of a labeled herbicide, such as EPTC (Eptam) or benefin (Balan), is desirable (for currently labeled herbicides, see the Georgia Pest Management Handbook at http://www.ent.uga.edu/pest-management/). Alfalfa may be seeded with a cultipacker-seeder (best) or a grain drill with a small seed attachment. Cultipacking or rolling before and after seeding will give a firm seedbed and improve stands.

When seeding alfalfa with a grass such as tall fescue or orchardgrass, drill the grass in rows and immediately overseed the alfalfa with a cultipacker-seeder. For seeding into existing cool season grass sods (e.g., tall fescue, orchardgrass), suppress the grass by closely mowing or grazing, follow with a contact herbicide, and then plant with a no-till drill.

Alfalfa should be seeded at a rate of 18 – 25 lbs per acre (Table 1). Rates at the high end of this range should be used when planting with a no-till drill. Regardless of the system used to plant the alfalfa, the seed should not be placed too deep (1/8 – 1/4 in. in loamy or clay loam soils; 1/4 – 1/2 in. in sandy loam or sandy soils). Soil should be firm around the seed to provide proper seed-soil contact. An insecticide application after initial germination may be needed to control insects such as field crickets.

In the Limestone Valley/Mountains region and the upper half of the Piedmont, a fall seeding in mid-September – late October is recommended. In the lower two-thirds of the state (Lower Piedmont and Coastal Plain), a mid-October – late November seeding is recommended. Plantings made in early March – mid-April are much less desirable, but may be successful in north Georgia if there is a very aggressive defense against weeds and irrigation is available. When planting into cool or warm season perennial grass sods, do not plant in the spring.

Table 1. Seeding rate of alfalfa when broadcast, drilled, or planted with a cultipacker-seeder (CPS).