Excellent for overseeding closely grazed grass sods during December-January in south GA or February-March in north GA. Seed in October-early November, usually planted with cool season annual grasses. Because this species is often seeded with multiple grass and/or legume species, see Establishment of Cool Season Annual Legumes for more details. Also, because this species is small seeded, see Seeding Methods for Small Seeded Legumes for details on how to successfully plant. 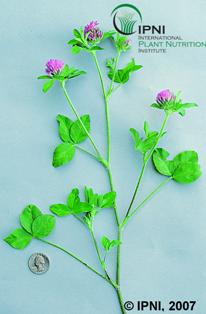 Red clover is a short-lived perennial legume that is adapted to a fairly wide range of soils. It is deep-rooted and, like alfalfa, does best on well-drained sites. It is more tolerant of lower fertility and soil acidity than alfalfa, but it does best and persists better under good fertility. Red clover stands generally start to thin the second year. Some stands in Georgia have persisted for several years (most likely a result of reseeding). Red clover is best adapted to heavy fertile soils in north Georgia and can be seeded into tall fescue or orchardgrass stands along with white clover. However, red clover does not tolerate close grazing and will not produce or survive well in continuously stocked pastures. Diseases also may limit stand life during cool, moist springs.

In some areas of south Georgia, red clover is used as an annual to overseed pastures or mix with a small grain or ryegrass. Some varieties are available that are resistant to root-knot nematodes and well-adapted to sandy loam and loamy soils in the Coastal Plain. These varieties are usually less winter dormant and produce more spring and autumn forage than other varieties. Though these more winter-active varieties are well suited to south Georgia, they may be less winter hardy than other varieties and not well suited for north Georgia. Regardless, red clover should not be planted on droughty soils such as deep sands.

Red clover is well-suited for use as a companion to tall fescue or orchardgrass. This clover can be planted along with cool season perennial grasses in new plantings or can be established into existing grass stands.

When planted with grass seed, the clover can be very competitive with the grass. Therefore, clover seeding rates should be reduced by 25% when used in new plantings with a cool season perennial grass. In most cases, it is best to interseed the legumes after the grass stand is well-established.

Seeding rates are 6 – 8 lbs of red clover per acre when drilled or 12 – 15 lbs per acre when broadcast. When seeding into tall fescue sods in the fall, closely graze or clip the grass before planting. On thick sods, some seedbed preparation (mild disking) may be needed to thin the sod and to improve the vigor of the clovers during establishment. Contact herbicides may also be used to retard the fescue in the fall to aid in obtaining a good stand of clover. The use of a no-till drill, which can cut through the sod and place the seed into the soil, is the preferred method of seeding.  Broadcasting and dragging seed onto a rough prepared seedbed can also be successful. More information on broadcasting legume seed is detailed in Factsheet CSS-F004 “Seeding Methods for Small-Seeded Legumes.”

Red clover should be seeded in the fall (September-October). In the Limestone Valley/Mountains Region, either clover can be planted in the winter (late January to early March). For a late winter seeding (sometimes called “frost seeding”), the seed may be broadcast or drilled into a closely-grazed sod. Where the soil is exposed, the freezing and thawing of soil moisture during the winter will allow broadcast seed to work down into the soil. Many farmers in the Limestone Valley/Mountains Region have had better results with late winter than with fall seedings because of better moisture conditions and fewer insect problems.