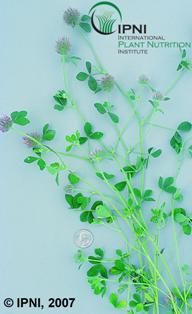 Rose clover is commonly grown in California, but it had not been widely grown in the Southeast until recently. It has hairy leaves and stems and a growing season similar to crimson. It is winter dormant and produces forage later and flowers later than crimson (though it matures earlier than arrowleaf). It is more drought tolerant, more tolerant of acid soil conditions, and a better reseeder than crimson. It generally stands up well under heavy-grazing, but animals should be removed in mid-April to allow the stand to produce seed. Seed in October-early November, usually planted with cool season annual grasses. Because this species is often seeded with multiple grass and/or legume species, see Establishment of Cool Season Annual Legumes for more details. Also, because this species is small seeded, see Seeding Methods for Small Seeded Legumes for details on how to successfully plant.