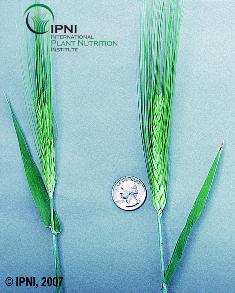 Rye is the most drought tolerant and winter hardy small grain grown in Georgia. It is also more tolerant of soil acidity than other winter annual grasses. It can be planted in early fall and usually produces good grazing by late fall. Rye produces more forage in late winter than the other small grains. Since it matures earlier than any other winter annual, it is well-suited for early grazing or haylage production on crop land that must be prepared in early spring for summer row crops. Forage quality declines rapidly in spring as the plants become stemmy and leaf production decreases. Varieties differ in maturity and some varieties will begin seedhead production as early as mid-January in south Georgia. Mixing rye varieties will enable more even production of high quality forage. However, blending rye with ryegrass or annual legumes will extend the grazing period.

Establish rye on well-drained, fertile soils when possible. If the sites are somewhat poorly-drained, ryegrass will be a better choice than rye or the other small grains. Treat small grain seed with an approved fungicide prior to planting. Seedling diseases such as Phytophthora, Rhizoctonia, Pythium, and others reduce stands when planted in the warmer months of September and October, especially in south Georgia.

Rye can be seeded between late August and early October in the Limestone Valley/Mountains region, early September and mid- to late October in the Piedmont region, and late September to late October in the Coastal Plain region. If late fall and early winter grazing is desired (lower Piedmont and Coastal Plain regions only), plant at the earlier dates of these ranges and into a prepared seedbed. Do not overgraze these pastures during the late fall or early winter. For best results, maintain at least 2 ½ in. of stubble height.

If planting into a prepared seedbed, prepare the seedbed two to three weeks before planting, if practical. This will allow the soil to settle and firm, thus improving seed germination and seedling development. Although deep soil preparation is not necessary for the grazing crop, deep tillage may benefit row crops planted in the spring.

Seed can be placed more precisely with a drill or cultipacker seeder than by broadcasting and disking. When seed are broadcast, increase the seeding rate by 25 – 30% to allow for variable seed placement. Plant small grain seed 1 – 1 ½ in. deep in moist soil. Do not plant ryegrass seed deeper than ½ in. When planting mixtures of ryegrass and rye, it may be easier to control the seeding depth of these species by broadcasting ryegrass seed and then drilling the small grain seed into the seedbed.

Apply 40 – 50 lbs of N per acre at planting or soon after the plants emerge to increase growth, tillering (thickening of the stand), and provide earlier grazing. A second application of 40 – 50 lbs of N per acre should be applied in mid-winter to increase winter and spring forage production. Because ryegrass is longer-lived, a third application of 40 – 50 lbs of N per acre may be needed in early spring when the ryegrass component is used for late spring grazing, hay, or silage crop. Rates of N in excess of these amounts may result in substantial N losses to leaching and excessive growth during the winter. Fresh, tender growth that occurs when nitrogen is in excess could be damaged by extremely cold weather.