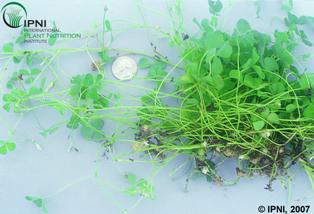 Subterranean clover (sub clover) is native to the Mediterranean and the Near East and well-adapted to areas with relatively warm moist winters and dry summers. Sub clover is low growing (less than 1 ½ ft tall), but will create a very dense forage mat.

Its inconspicuous flowers will form burs after fertilization. The stiff-forked bristles of the seed bur allow it to peg or bury itself into the soil (much like peanuts), hence the name “subterranean” clover. It also produces hard seed with high temperature requirement for seed to emerge from dormancy. However, in most management systems it is not feasible to allow the stand to progress to this advanced maturity stage. Thus, it is capable of good reseeding, but its reseeding potential is poor in practice.

Sub clover is best adapted to overseeding on perennial grass pastures. It provides forage in late winter and early spring. In a stocker program, sub clover overseeded on permanent summer pastures can serve as a reserve feed source. The productive season is similar to crimson.