Seed broadcast at 2 to 3 lb/A in October-November or February-March. 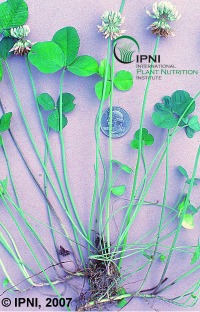 White clover is one of the most widely-grown forage legume crops in the world. It is adapted to a wide range of soils and climates and is grown for forage from Florida to the northeastern United States. White clover is a relatively low growing legume that spreads by stolons and can tolerate close grazing. It furnishes grazing in fall, late winter, and spring. Yields of white clover are usually not sufficient for it to be grown alone or in a hay crop, but it contributes a substantial amount of high quality forage when produced with cool season perennial grasses, such as tall fescue. White clover is also compatible with some bermudagrass varieties, when grown in pastures.

White clover grows best on moist soils and can die during hot, dry summers. However, some new varieties of white clover are more persistent and will either survive these conditions or return from seed. This legume is generally most productive on fertile soils along streams. In the upper Piedmont and Limestone Valley/Mountains region, white clover does well on upland soils.

There are three basic types of white clover: large (e.g., Ladino clover, ‘Patriot,’ ‘Regal’), intermediate (e.g., ‘Durana,’ ‘Osceola’), and low growing (e.g., Dutch clover). Large or ladino types are higher yielding than other types, but they do not reseed as well as the other types and are generally more short-lived.

The intermediate types are well-adapted to most sites throughout Georgia. They are prolific reseeders and may act as annual plants in south Georgia. Some improved intermediate white clovers are exceptionally tolerant of grazing and persist very well, even in some drought-prone and infertile sites.

Low-growing types are commonly seen growing on roadsides and in yards. Although they also are prolific reseeders, they are not planted for forage because of low yields and a poor ability to compete with grasses.

White clover is well-suited for use as a companion to tall fescue or orchardgrass. This clover can be planted along with cool season perennial grasses in new plantings or can be established into existing grass stands.

When planted with grass seed, white clover can be very competitive with the grass. Therefore, clover seeding rates should be reduced by 25% when used in new plantings with a cool season perennial grass. In most cases, it is best to interseed the legumes after the grass stand is well-established.

Seeding rates are 2 – 3 lbs of white clover per acre (drill or broadcast).  When seeding into tall fescue sods in the fall, closely graze or clip the grass before planting. On thick sods, some seedbed preparation (mild disking) may be needed to thin the sod and to improve the vigor of the clovers during establishment. Contact herbicides may also be used to retard the fescue in the fall to aid in obtaining a good stand of clover. The use of a no-till drill, which can cut through the sod and place the seed into the soil, is the preferred method of seeding. Broadcasting and dragging seed onto a rough prepared seedbed can also be successful.  More information on broadcasting legume seed is detailed in Factsheet CSS-F004 “Seeding Methods for Small-Seeded Legumes.”

White clover should be seeded in the fall (September-October). In the Limestone Valley/Mountains Region, it can be planted in the winter (late January to early March). For a late winter seeding (sometimes called “frost seeding”), the seed may be broadcast or drilled into a closely-grazed sod. Where the soil is exposed, the freezing and thawing of soil moisture during the winter will allow broadcast seed to work down into the soil. Many farmers in the Limestone Valley/Mountains Region have had better results with late winter than with fall seedings because of better moisture conditions and fewer insect problems.