Annual lespedezas used for forage in the South consist of two species (striate lespedeza and Korean lespedeza) that were introduced from Korea and Japan. They are adapted to a wide range of soils and fertility levels and are used in pasture mixtures to provide good quality grazing from late spring until fall. Annual lespedezas can be cut for hay but yields are relatively low. High levels of soil fertility will result in the lespedezas being crowded out by warm season perennial grasses. 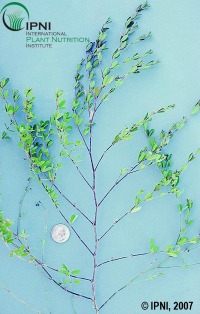 Striate lespedeza is commonly referred to simply by the variety names ‘Kobe’ or ‘Marion.’ Striate is the most useful of the annual lespedezas in the South. It provides significant grazing and can be cut for hay. Striate has narrower leaflets than Korean varieties and produce seed in the axils of branches directly along the stem. Varieties of this species are prolific seed producers and will reseed in pastures. Improved varieties have superior reseeding potential, yields, and disease resistance. 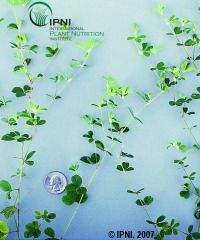 Annual lespedeza can be sown from mid-winter until early spring. Adequate stands in pastures, fallow land, or overtop of small grain crops will normally be achieved by broadcasting seed without covering. When planting in late spring on prepared seedbeds, use a grain drill or cultipacker-seeder to cover seed with about ¼ in. of soil. For a pure stand, broadcast 20 – 30 lbs or drill in 15 – 20 lbs of inoculated, unhulled seed per acre.