Seeded types planted at 5 to 10 lb/A in spring. Hybrids are planted in March-April with sprigs at 40 to 70 bu/A in rows. 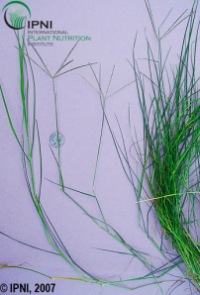 Bermudagrass is a high-yielding, sod-forming grass that is well-suited for grazing or hay production. It grows best on well-drained, fertile soils where ample moisture is available. Bermudagrass does not persist on poorly-drained Flatwoods soils but can be successfully grown on deep sandy soils because of its deep root system.

Georgia has played important roles in the history of forage bermudagrass in the U.S. and around the world. Common bermudagrass was reportedly introduced into the U.S. (probably from either India or Africa) in 1751 by Georgia’s second royal governor, Henry Ellis, in Savannah. Researchers and plant breeders from Georgia have also made significant advances that resulted in improved bermudagrass yields and forage quality. During his career, Dr. Glenn Burton, plant geneticist at the Georgia Coastal Plain Experiment Station (GCPES) in Tifton from 1936-1997, developed several hybrid bermudagrasses for southern forage programs. His most successful releases (e.g., ‘Coastal,’ ‘Tifton 44,’ and ‘Tifton 85’) continue to be recommended throughout the southeastern USA and in similar climates around the world. The warm season grass breeding program at the GCPES has continued this legacy of significant improvement in forage bermudagrass, with new and improved cultivars on the horizon.

Several varieties of bermudagrass are grown in Georgia. Improved hybrid bermudagrasses that are recommended for Georgia will consistently provide higher yields and superior quality relative to other varieties (Figure 1 below). Hybrid bermudagrasses respond to high N levels (200 – 400 lbs/acre) in a hay production program. These grasses produce well over 4 - 6 tons of hay per acre when moisture is not limiting. Under hay production, hybrid bermudagrasses can be cut four to five times per year. When used for grazing, these grasses provide high yields of good quality forage when the stocking rate is managed to keep the grass closely grazed (2 – 6 inches) to maintain good forage quality. Common bermudagrass quickly became widespread throughout Georgia following its introduction.

Common bermudagrass produces viable seed and also spreads by stolons and rhizomes, so once it is established in a pasture, it is difficult to eradicate. Consequently, common bermudagrass often serves as a default species in many pastures in Georgia. It usually will fill in where other species or varieties thin out.

Common bermudagrass grows on more than 400,000 acres in Georgia. Although common does not provide high yields (only 50 – 60% as much hay per acre as Coastal) it can be effectively used in forage programs to provide summer grazing. In north Georgia, it commonly invades tall fescue but can be effectively utilized in the pasture, especially when combined with clover.

Improved seeded bermudagrasses are becoming more popular, particularly when sprigging an improved hybrid bermudagrass is not feasible. However, care should be exercised when selecting a seeded variety, as some relatively inexpensive seeded varieties may merely be unimproved common varieties from other regions.

Detailed information about vegetatively-propagated and improved seeded varieties of bermudagrass is provided in the UGA Cooperative Extension Circular C-919: “Selecting a Forage Bermudagrass Variety.” Varieties that are currently recommended are listed in the "At-A-Glance" table above.

The hybrid bermudagrasses produce few viable seed in a pure stand and must be established from vegetative plant material. Freshly dug sprigs (rhizomes or stolons) are the best source of planting stock for the hybrid bermudagrasses. Although mature top growth (clippings or “tops”) can be used to establish stands of some varieties, growing conditions must be favorable for top-growth plantings to succeed.

There are two generalized methods by which it is recommended to sprig bermudagrass: dormant sprigging or spring sprigging. Dormant sprigging can occur in the winter (February – early March) when the plants have not yet emerged from dormancy (i.e., before spring green-up). This method has generally been very successful throughout most of Georgia. Excessive moisture in winter limits dormant sprigging plantings. However, this method generally allows for quicker coverage in the establishment year. Spring sprigging is recommended to be performed in mid- to late-spring (May – June). Sprigging can be successful even as late as mid-summer (late July in north Georgia and late August in south Georgia). However, plantings after late June tend to be more likely to encounter moisture deficit, heat stress, and weed competition. 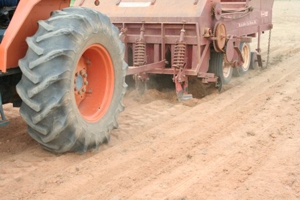 Plant the hybrid bermudagrass sprigs into a moist, well-prepared seedbed at a sprigging rate of at least 30 – 50 bushels of sprigs per acre. Commercial sprigging machines generally result in the best results (Figure 2, at right). These machines plant sprigs 2 – 3 in. deep and firm the soil around the sprigs. Broadcast applications of sprigs can also result in successful establishment if 50 - 75 bushels of sprigs per acre are spread on a prepared seedbed and immediately lightly-disked into the soil. Regardless of establishment method, it is very important to firm the soil around the sprig to maintain sprig/soil contact, retain soil moisture, and improve sprig survival. The sprigs should not be covered with more than about 1 – 2 in. of soil. Sprigs that covered too deeply may not survive, especially on heavy clay soils that crust over after a rain.

Prior to planting, apply lime, P and K according to soil test recommendations. Apply 35 – 50 lbs of N per acre after the sprigs start to grow. With early planting dates, a second application of 50 – 75 lbs of N per acre will be necessary to promote rapid coverage. Good weed control during the establishment phase is essential. Newly-established bermudagrass cannot compete with rapidly growing annual grasses and broadleaf weeds. A thick cover of weeds slows stand establishment by shading the emerging bermudagrass plants and preventing the bermudagrass stolons from pinning down.

Application of diuron, a pre-emergence herbicide will help reduce weed competition in newly-sprigged bermudagrass. Diuron applications provide fair to good control of crabgrass, crowfootgrass and goosegrass and provide residual control of certain annual broadleaf weeds. Diuron should be applied immediately after sprigging before weeds emerge. Bermuda sprigs should be planted 2 in. deep to lessen chance of injury. Emerged bermudagrass at the time of treatment may be temporarily injured. Do not graze or feed treated foliage for 70 days after diuron application. After emergence, most broadleaf weeds can be controlled with 2,4-D. See the Georgia Pest Management Handbook and check with your County Extension Agent for additional information and current recommendations.

Plant 5 – 8 lbs of bermudagrass seed (hulled) per acre into a moist, well-prepared seedbed in spring to early summer. Seed can be drilled or broadcast and cultipacked to firm the soil. Do not graze or harvest for hay until the plants are well-established. With good growth conditions, spring plantings can be grazed in late summer.